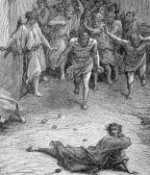 Does Acts 6:5 function to establish Stephen as a Point-of-View Character?

by GARY YAMASAKI   A previous post suggested the “badge of reliability” may qualify as an ideological-plane device for leading readers to experience a specific narrative event through the point of view of a particular character. This post looks to a textual feature of the Book of Acts as a possible means by which the badge of… Read More ›

by GARY YAMASAKI   The phraseological plane of point of view is definitely the least significant of the six–it being the least utilized–but it has got to be the most fascinating for its ability to influence in a most unassuming fashion through whose point of view an audience experiences an event. Unfortunately, this plane’s transition… Read More ›

The Seahawks, the “historical present” and Point of View on the Temporal Plane

by Gary Yamasaki   Third and five, on the Redskins 27. . .Wilson is in the shotgun. . .he takes the snap and hands off to Lynch trying the left side. . .he cuts to the right and evades a tackle. . .he has the first down. . .he gets to the outside. . .crosses the… Read More ›

“The Hobbit” – a Review from a Unique Point of View

by GARY YAMASAKI   The blogosphere is swarming with reviews of “The Hobbit,” so what else can be said? Well, this is a blog on perspective criticism, and a look at The Hobbit from the point of view of “Point of View” would stand out from the rest. So, just like earlier posts have examined… Read More ›

by ROBERT TANNEHILL   It is good to ask whether the different planes of point of view reinforce each other or limit each other, as Gary Yamasaki argues in the post entitled How Perspective Criticism Actually Works contrasting the spatial point of view of following with the psychological and informational. However, in doing this I think… Read More ›

Synching Minds: “Butch Cassidy” and the Informational Plane of Point of View

by GARY YAMASAKI   The classic Butch Cassidy and the Sundance Kid makes for an intriguing study in  point-of-view crafting. Such a study could explore any of the three planes of point of view developed in earlier posts, but it is the informational plane that will be the focus of this post. Who Knew What When… Read More ›

Does Abram have Sarai claim she is his “sister” (Gen 12: 13) as a ploy to obtain wealth? A look at point of view on the “Psychological Plane”

by GARY YAMASAKI   The film Being John Malkovich presents the intriguing concept of a portal providing access into the mind of real-life actor John Malkovich. So, a character uses the portal to get inside this actor’s head, and the camera follows the character and shoots out through Malkovich’s eye sockets to show all he is… Read More ›

Perspective in Live Performance: To Embody or Not to Embody?

by LEON SEAMAN   The post entitled How might ‘Live Performances’ of Biblical Passages be influenced by Awareness of Point-of-View Dynamics?  raises an intriguing question, and one that could (and should) be addressed at length. I’ll offer just a couple of brief observations from my own experience in performing Mark. First, the observation that not every… Read More ›

Who Knew What When? Meir Sternberg’s “Informational Axis” and the Four Leprous Men of Samaria (2 Kgs 7:3-5)

by GARY YAMASAKI   With some narrative accounts in the Bible, you can’t help but view the events through the point of view of particular characters. You may not know why it is happening, but you can’t deny that it is happening. One such case is the account of the four leprous men of Samaria (2… Read More ›

by GARY YAMASAKI   Primary Colors (1998) presents a story set in 1992 of Jack Stanton, a philandering southern governor, vying for the presidency. Sound familiar? John Travolta, who plays the governor, even sports a Clintonesque accent. Not surprisingly, all the action of the movie swirls around Jack and his wife Susan–the Hillary character. But… Read More ›